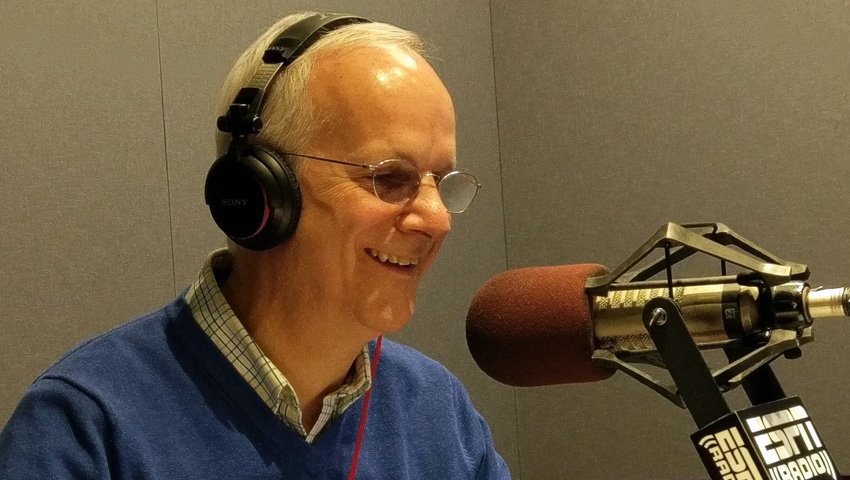 It happened 25-years ago tonight. Just three guys in a booth talking sports for seven hours on a Saturday night.

But, it wasn’t the usual weekend banter at the local sports bar. This conversation was taking place in a small studio in Bristol, Connecticut, and it was being shared with sports fans across the country.

(For the story of how the network teamed me with Tony Bruno, check out the Reflections on My Years at ESPN Radio post from March, 2013.

A quarter of a century after the debut of GameNight on ESPN Radio, I have a few thoughts to share.

We knew Chuck had a terrific program in Rhode Island. We chose him because we liked his knowledge, his news instincts, his writing, the feel of his voice and his literate approach to the program.
John Walsh, Executive Editor of ESPN – January 3, 1992, Providence (RI) Journal

The Chance to Be Part of Something Special

The best memories in life are the ones we share with others. It’s the reason that I have loved team sports all my life. It is the shared commitment to achieve a goal. All the hard work and dedication it takes to produce something special. The highs and lows. The different personalities and perspectives. The laughs, gaffes, and poignant moments. It’s the journey more than the outcomes, that supply the lasting memories.

We had a team at ESPN Radio.

The People Who Made ESPN Radio Work

The following is just my perspective on the early days of ESPN Radio, and some of the people who were responsible for what you heard on the air. Of course, Gamenight revolved around the considerable talents of one Anthony J. Bruno.

Partnering with Tony Bruno was the most fun I’ve ever had in radio. If you’ve listened to him, you know how funny he is. But, Tony’s brilliance goes far beyond his humor, quick wit and his cackle. (Does anyone laugh quite like Tony?) His ability to handle any on-air situation is remarkable. Tony’s a terrific guy. A longtime friend. I will forever appreciate the chance to have shared the mic with him.

I worked with more than 200 co-hosts in my close to 17-years at the network. We think the total is over 250. The co-hosts I worked with the most included: Chris Moore (smart and very funny; I really enjoyed my time with Chris), Peter Brown (I probably had more sports arguments with Peter on-air than with any other host. Peter was smart and quick, but he could go off the deep end at times, like when he said “Tiger Woods is overrated. He’ll never win a major.” I think Peter enjoyed seeing me go crazy when he would say such things), Todd Wright (Todd had really interesting takes and questions for guests. I really appreciated his talent), Bob Valvano (a wonderful storyteller and a great guy to be around), and later, Doug Gottlieb (Doug’s strong opinions rub some people the wrong way, but he backs-up his point of view. I really enjoyed working with Doug). Freddie Coleman and Ian Fitzsimmons, too. There are so many talented people I could name. In all of my years at the network, there really were only a couple of individuals that weren’t enjoyable to work with. (No, I’m not going to name them.)

ESPN Radio was given a big boost by the credibility brought over from the TV side. When the Radio Network went on the air, Keith Olbermann would join Tony and me one night and Mike Tirico would join us on the other night. Keith and Mike are as different as night and day, but both were outstanding.

Agree or disagree with his politics, Keith’s talents are amazing to witness up close. His sports acumen, historical perspective, and writing skills are extraordinary. Keith and Tony are long-time friends and often agreed in the booth, leaving me to take on the two of them on most sports issues that arose. (And not just the ones involving sportsmanship!) I probably lost most of the arguments, but I always enjoyed taking them on.

On the flip side, Mike Tirico and I tended to agree on sports issues. That left Tony to fend off the two of us, which he usually did by making us laugh so hard, we would forget the point we were trying to make. Mike is wonderfully talented. He is generous in setting-up his on-air partners, and low ego. He always puts the focus on the game, not himself. I have enormous respect for Mike and his work ethic. He was the lead host for the 2-hour Sunday morning ESPN Radio Magazine show. Mike Lupica, Mitch Albom, and Chris Mortensen were among the regular contributors. It was an outstanding program.

Dick Schaap and Brent Musburger brought immediate credibility to the network. Nanci Donnellon, aka The Fabulous Sports Babe, joined us 2-years in, becoming the first woman to host a nationally syndicated sports show. Despite our almost polar opposite personalities, we got along well. I filled in for “The Babe” on her show a number of times, and enjoyed it.

The ESPN TV analysts who joined us in those early days were terrific. John Clayton, Chris Mortensen, Mel Kiper Jr, Peter Gammons, Tim Kurkjian, Jayson Stark, Dick Vitale, Bob Ley, Barry Melrose, Joe Lunardi…the list is long. They each provided valuable insight to listeners in those early years and listeners were able to get to know them better as we developed on-air relationships with them. It was great fun for us. The analysts were critical to the success of ESPN Radio.

The quarter-hour updates were handled by some very talented people, including the great Dan Davis, John Cloughesy, Bob Picozzi, Jon Stashower, Jay Reynolds, Mark Kestecher, Doug Brown, Joe D’Ambrosio, and Christine Lisi (among others). They brought multiple skills to the network. Almost all of them host their own shows, do play-by-play, or both.

Operations Manager Bob Sagendorf led the effort to keep us on the air. It wasn’t easy. The radio venture was a partnership between ABC Radio and ESPN. ABC Radio provided the equipment. My understanding is that there really was little budgeted for the equipment. It was whatever ABC Radio could spare. So, the challenges were considerable.

And, then there were the producers who were responsible for 7-straight hours of programming on Saturday and Sunday night, plus commentaries, and the Sunday morning show. And, remember, there were no listener call-in segments. There was a continuous push to get guests on to react to games and sports stories.

No one is more responsible for the strengths of ESPN Radio’s first 25-years than producer John Martin, who has been there since Day One. The “Chief”, as we all call him, is a great storyteller. That talent is matched by his news judgement, creativity, and his production and talent evaluation skills. John got the long-form programming off to a solid start, before turning his full-time attention to guiding ESPN Radio’s event productions. He quickly produced consistently excellent play-by-play event productions and helped the network forge partnerships with the major sports leagues. (BTW: You can thank John Martin for bringing the brilliant Dan Shulman to ESPN.)

Beth Faber is the other original member of the ESPN Radio team who is still producing for the network today. You would be hard-pressed to find anyone who doesn’t like Beth.

Other early contributors on the production staff included Len Weiner, who went on become General Manager, and Ron Flatter, who was a wizard with the use of sound. Denis Horgan, Ted Gangi and Steve Barenfeld were key early contributors, as well. All had different approaches and personalities, but brought creativity and a lot of ability to the table. Keith Goralski arrived a year after the network start and was one of the valued team members who moved into a management position (as did Pete Gianesini and Justin Craig, who arrived in the late 90’s).

One of the more interesting characters at the network Day One was Bruce Murray. Talented and opinionated, Bruce was a very good producer, but didn’t seem at all happy in that role. He was convinced he should be on-air. So, he soon quit. And, he was right! Bruce went on to become a successful host for Sporting News Radio and is now on SiriusXM Radio.

Peter Ciccone brought valuable news judgment to the on-air product. Peter later moved into a management position and remains with the network. He largely was responsible for my 3-year return to ESPN Radio in 2010. (Thank you “Chich”!)

And, there is my long-time friend and inspiration Bill Rodman, who arrived at ESPN Radio as Executive Producer in 1994. He and I have collaborated on projects ever since. Bill produced the award-winning Viewpoints program that I co-hosted with the great Frank DeFord. Bill has a passion for producing great storytelling. He cares about quality. He works his tale off and never settles. That’s why I admire him so much.

Other than the general managers noted below, I’ve tried to limit mentions just to some of the individuals who were with the network early on. There is no way to acknowledge everyone. I’ve been operating without a list, so I’m sure I’ve forgotten more than a few people I should have mentioned. If you are in that category, please forgive the oversight.

To all of the ESPN Radio bosses I reported to in my close to 17-years: Kevin Young, Mark Mason, Drew Hayes, Len Weiner, Eric Schoenfeld, Bruce Gilbert, and Scott Masteller — I send my appreciation for your support, guidance, and understanding over the years. I learned something of value from each of you.

And to Office Manager Janet Alden: Every business needs a go-to person who can solve a problem and cut through the red tape to get things done. You were indispensable and a great friend to everyone. You did so much for ESPN Radio.

Anything we achieve in professional life is due, at least in part, to the influence of someone else. We all need someone who believes in us, someone who gives us a chance to stretch our abilities and do something we haven’t done before.

At ESPN, John Walsh was that person for me. From the day in November, 1991, when he hired me, to the day he left, John was generous with his time, insights and suggestions. What a brilliant mind. I learned so much during my time with him.

We traveled to the World Series, MLB All-Star Games, Super Bowls, and NCAA Basketball Final Fours. I am so grateful.

And one final note of appreciation goes to my long time friend and agent, Ed Kleven. Ed was with me for the entire ESPN Radio journey. A more trusted and honorable friend, you would not find. Ed endured decades with MS, and a long, difficult battle with cancer, without complaint or self-pity. Ed died last May. I miss him. Ed was a good man.

Within 4-years of its start date, there were approximately 300 ESPN affiliated radio stations covering about 97% of the United States. And today, ESPN’s audio presence is felt everywhere, through ESPNRadio.com streams, podcasts, play-by-play and on ESPN Radio stations connecting with over 20 million listeners weekly.

I’m proud to have worked with so many talented colleagues to help the network get its start, and appreciate the friendships and memories from my time at ESPN Radio.

It’s been fun to reminisce. Now, back to work on Even Field®!